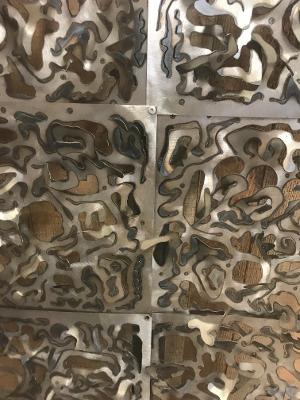 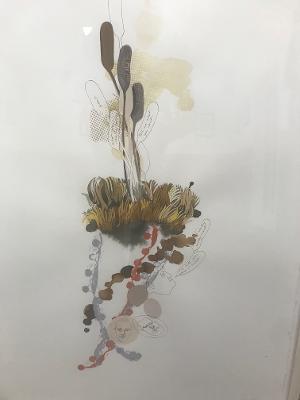 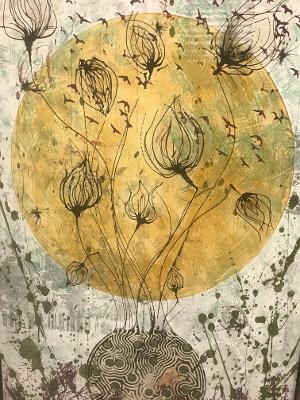 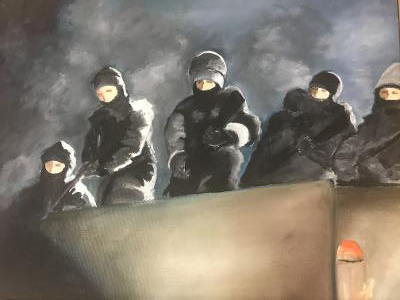 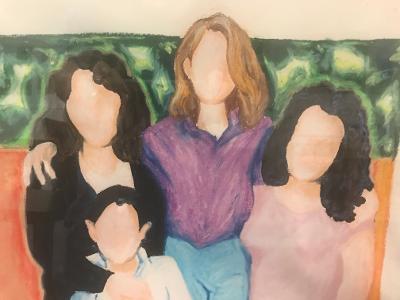 Margaret Curtis
Born in Hamilton, Bermuda, Margaret Curtis is a painter and visual artist. She has been creating feminist-based work since the late 1980s. Curtis has been included in shows at The Brooklyn Museum, The Andy Warhol Museum, The Huntington Beach Art Center, The Mint Museum and The Wexner Center.

Connie Bostic In 1991, artist Connie Bostic opened Zone One, downtown Asheville’s first contemporary art gallery. For about a decade, the space was a vital creative incubator, social hub, and artistic platform. Bostic exhibited both local artists and luminaries such as the late Robert Mapplethorpe and Keith Haring.

Mary Montes is an Abstract Expressionist painter who fuses representation with abstraction. While studying fine art at Barry University and the University of Miami she developed a painterly style that accentuates her mastery in drawing with a lively application of line and color. Her work is the result of an artist Residency at the Black Mountain Press.

Melissa Terezza Pace is an artist and environmental activist whose mixed-media approach to art is on view at the Flood Gallery. “Using an image transfer process, each tile is a one of a kind treasure, Melissa explains, “experimenting and working with new materials helps my personal growth as an artist.”

Jarrett Leone studied art and sculpture at Western Carolina University. He explored various styles and mediums in his painting, sculpture and jewelry, as well as in his music while living in Asheville, NC. He now lives in Salt Lake City where he is participating in art exhibition and his craft work.

Donald Evans is best known for his sci-fi art and has received several awards for his work. His current exhibit features wildlife and landscapes that showcases his love and skill for drawing realistically.

Oguz Erdur, is a poet and photographer from Istanbul, Turkey with several books to his credit that feature his poetry and unusual photographic works. He is currently living in the Bat Cave area, NC.

Cynlos is a poet and sculpture artist from Mexico and the US, has numerous published works, and has exhibited throughout Mexico and the US, including the University of Guanajuato, National Gallery in Washington DC and the Los Angeles Center for Digital Art.

Linda Larsen, living and working in Asheville, NC, is primarily a painter fixated on the human figure and how it moves/struggles from within its own interior space out into the external world. Political and social justice issues intertwine and pin her work in both history and the culture of now.

Adam Larsen has designed video projections for over 200 productions in theatre, dance, symphony and opera. Projects have ranged from intimate to extravagant and have appeared both on Broadway and in many of the major venues across the world.

On Exhibit at the Flood Gallery Fine Art Center

The Fine Art Center also includes the
Courtyard Gallery and the Black Mountain Press
Open Mic hosted by Mark is every Thursday From 6pm to 8pm
sign up is at 6pm, 850 Blue Ridge Rd, Black Mountain, NC

Want to exhibit at the Flood Gallery? Submit work for publication at the Black Mountain Press?
Subscribe to The Halcyone? Submit below to apply!

The Flood Gallery Fine Art Center is a non-profit 501(c)3 and registered with the State and the IRS. Our tax returns can be examined at 850 Blue Ridge Rd, Black Mountain, NC 28711 with notice during operating hours.

Hamid Dabashi, Ph.D. talks about our traveling exhibition at
at the Flood Fine Arts Center and the
accompanying catalog. Iranian Poster Catalog and Descriptions.

In Search of Lost Causes by Hamid Dabashi from red 14 films on Vimeo.

The Flood Gallery Fine Art Center is a non-profit arts organization dedicated to promoting the arts in Asheville through the exhibition of established and emerging artists from all over the world. Through artist-residency programs, public events and workshops, and educational activities, Flood Gallery seeks to make art a vital and important part of life in Asheville.

Flood Gallery Fine Art Center programming is made possible through the generous support of the Dan Lucas Memorial Fund of the Community Foundation of Western North Carolina.